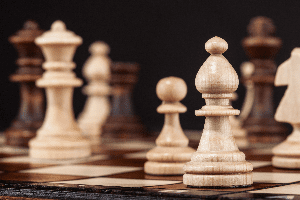 If your child plays chess, their primary goal is to improve their rating, or their relative skill compared to that of other players. The better your child plays, the higher their Elo rating, which is the measuring system used by both common chess-playing websites and internationally recognized chess organizations like the World Chess Federation (abbreviated FIDE, based on the federation’s French name) and the US Chess Federation (USCF).

As a parent, your goal is to help your child achieve their goals — and you can do that by becoming familiar with common chess terms and strategies that will help your child’s rating improve. Keep reading to learn some basic verbiage common to the chess world that will keep you an active player in your child’s chess advancements.

The Elo rating system was invented in the mid-1900s by an American physics professor and professional chess player named Arpad Elo. It’s currently the most common player rating system in chess, as well as in competitive board games and sports like football, basketball, baseball.

The Elo rating system is a little complicated for the average person to understand, as it’s based on a mathematical formula that calculates the likelihood of one player defeating another as a percentage. As the parent of a chess player, the main thing you need to know is that the rating system also assigns a number to each player based on how many games they’ve won or lost.

The higher their rating, the more skilled the player—and the more difficult they are to beat. If you beat another player, you add their Elo rating number to your own.

In most chess competitions, your child will face off against a player with a similar Elo rating. If your child wins, they’ll accrue a higher rating and advance to play against chess players who also have higher ratings.

Each official chess group uses Elo ratings slightly differently. For instance, the FIDE schedules tournaments based on its own categorization system, and the federation also release ratings a little differently than other groups.

Officially, the FIDE releases a monthly list of their highest-rated players using the Elo rating system. The highest rating ever achieved was by famed chess player Magnus Carlsen, who, in May 2014, topped out at 2882.

Unofficially, chess enthusiasts rate FIDE players after each game, assigning the players new ratings after each win or loss in a FIDE competition. (Incidentally, Carlsen boasts the highest live rating and the highest official rating).

The USCF classifies players who rate 2000 or above as experts, those 2200 and above as National Masters, and those 2400 and above as Senior Masters. Those who rate between 2200 and 2400 and have played at least 300 games where they’ve rated over 2200 are classified as Original Life Masters.

Your child earns a higher rating as they play and win more games—but it’s hard to keep winning tournaments and other competitions without a competent, confident teacher who can coach your child to victory.

If your child plays chess and wants to improve their rating, consider working with National Master Brandon Ashe. My USCF rating is 2320 and my FIDE rating is 2209 — so you know I’m perfectly qualified to help your child improve. Schedule a live online training session with your child today.