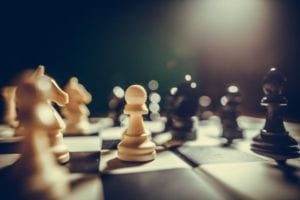 Success in chess is about more than proper piece management but rather about appropriate board control. Certain areas of the board provide more benefits than others, particularly the center four spaces. Obtaining control of these spots improves your chances of success, mainly if you can hinge a successful attack off of these spots.

Why Does the Center Matter?

The four spaces in the center of a chessboard provide the most possibilities for control and movement in the game. For example, if you place a rook in these spaces, they’ll take control over vast swaths of the board because the edges of the board won’t be right next to them. As a result, pieces here will have more flexibility of movement.

In addition, since most early movement in a chess game goes through the center of the board, control of these spaces gives you an edge and forces your opponent to work against your center position.

Center control also forces your opponent to the sides during the middle and late stages of the game and limits their movement on the more open board.

Which Pieces Control the Most Area?

Typically, you want pieces here that control the most possible area. For example, a queen at the center of the board has many more move possibilities than other pieces, which often makes her the best choice. However, the queen isn’t always the best choice, as the most appropriate piece varies depending on the specific game.

For example, pawn or even knight control in the center is often a good choice early in the game. The pawn will create a strong barrier when protected by another pawn because your opponent won’t want to sacrifice a good piece for a pawn. And a knight is a good choice here because they can leap over other pieces during the more congested earlier moments in a game.

How Do You Take the Center?

Control of the center is a multi-stage process that starts by moving your pawns towards this area and protecting them with other pawns. This step will expand your front line and force your opponent to answer by moving forward. At this point, you can then position other pieces to support the center further and drive away your opponent.

For example, you can use flank pawns — those at the edge of the board — to attack or distract pieces your opponent wants at the center. Though losing a pawn can often seem like a failure of strategy, getting your opponent to react gives you the incentive on the next move, takes them away from the center, and gives you an opening to take over the board.

When Should You Leave the Center?

Though center control is a wise tactic for chess, you shouldn’t focus your game entirely on this goal. Like in any game, you need to adjust your strategy to meet the needs of specific circumstances. Times when you should abandon the center or ignore this tactic include:

If you don’t take the center, use your opponent’s center position against them. For example, you can tease at center control, and then move around your opponent’s less-defended edge areas to break through their front line.

Who Can Help You Learn More?